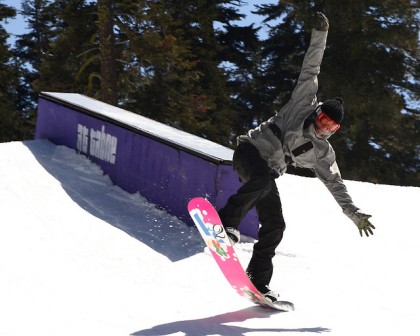 Snowboard flex rating is essentially as it sounds - it describes how flexible a snowboard is.

There is a large variance in that flexibility depending on the snowboard and what it’s designed for.

The first part of this post will go into more details on the different types of flex and the different flex ratings that are typically used by manufacturers.

The second part will take a look at what level of flex you should be going for - this will depend on your style and ability level.

There are broadly two different types of flex in a snowboard - longitudinal and  torsional.

Longitudinal flex is the flexibility of the snowboard length ways (from nose to tail). This is what is typically referred to when talking about the flex of a board.  The flex rating given by manufacturers refers to the longitudinal flex and so will be the focus of this post.

Longitudinal flex can be progressive or continuous. Progressive flex means that the flex in the center of the board, the nose and the tail could all have different levels of flex.

The following are common, but this isn't exhaustive:

This all depends on what the snowboard is designed to do and I’ll get more into that in the “what flex is best” section below.

Torsional flex is the flex width ways (from edge to edge). This is generally not considered by people when deciding on their snowboard purchase and typically there isn't a rating given out by manufacturers for this. Whether or not it should be considered is a debate for another post (but feel free to leave a comment below if you have any thoughts on this).

There isn’t a generalized standard across snowboarding manufacturers so there will be some difference in what one manufacturer considers “medium” compared to another. This is partly because there isn't any efforts to create a generalized system and partly because it's difficult to do so, given differing torsional flex and different flex in different areas of the snowboard (tip, tail, between the bindings etc).

I have seen other scales that translate more like this:

Essentially they are saying the same thing but with different terms (and different number ranges) so it pays to double check the scale that the retailer or manufacturer is using before deciding.

For example one retailer may use the second scale above and rate the board as medium and in reality it has a flex of 3 out of 10 - that same board would be rated as medium-to-soft on the other rating - so make sure you know the scales being used.

All the reviews and discussions surrounding flex on this website use the first scale above, unless otherwise mentioned. And I try to give both a word flex rating and a number rating so it is more clear as to the actual flex of the board.

What Flex is Best?

O.k. that’s all well and good but which flex is better? This, of course, depends on a number of factors including style, ability and bodyweight.

Every rating of flex all the way from 1 to 10 has it’s uses and is the “best” in any given situation.

Certain styles are more conducive to either a softer or stiffer flex. If you are a freestyle rider who likes to ride in the park or on the streets, then you usually want a softer flexing board. This increases maneuverability for spins, allows for easier butters/presses, other ground tricks, and easier/better on jibs

Street (aka Urban/Jib/Noodles) boards tend to be very soft, 1-2 out of 10 and will perform very well with butters - but they won’t take you very far from the park and may not be suitable for bigger features. If you are a free-rider who loves to ride the backcountry, bomb steeps at speed and generally ride aggressively and love to carve, then a stiffer flex will serve you much better than a soft flex.

A stiffer flex will give you greater stability and edge-hold, particularly at high speeds.

The flex in the nose is often softer than it is in the tail. The softer nose helps to keep it afloat in powder and the stiffer tail helps with edge-hold and really ripping carves.

Freeride boards will typically have anything from a 7 to 10 flex (depending on personal preference bodyweight etc). You can get some that are a little softer, but the majority are in that flex range.

All Mountain riders who like to do a bit of everything will naturally look for something in between.

A majority of all mountain boards will be between 4 and 7 out of 10. Though beginner all-mountain and all-mountain-freestyle boards can be a lot softer too.

As well as style, ability affects your flex decision too.

A softer flexing board is easier to control and to maneuver, particularly at slow speeds and is more forgiving of mistakes. It makes turn initiations physically easier too. Therefore a softer flex is typically better for beginners.

Depending on whether you're a high end beginner, a beginner-beginner, your body weight and how soon you are willing to upgrade will depend on if you go more for a really soft flex or more of a medium-soft (3 or 4 out of 10) flex.

Check out the post below for more on what makes the best beginner snowboard:

>>How to choose the best snowboard for beginners

Finally, what flex is right for you also very much depends on your weight.

If you are on the lighter side, then a board that is too stiff is going to be very difficult to control - the board will likely be taking you for a ride down the mountain rather than you riding it! And if you're on the heavier side a board might feel too soft and noodly for your tastes.

But if you get a board in the right length, then the flex should feel right for you - and thankfully most (but not all) manufacturers have a suggested weight range for each length of a particular snowboard. The length of the board also affects the board’s flex.

Check out my post on finding the right length snowboard for more info about choosing the best length.

Finding the right length for your weight should give you the right flex-feel for your style/ability as per above. But if you're:

And that’s about the gist of it

O.k. so hopefully you’ve learned something about snowboard flex today and hopefully this will help with figuring out which flex is best for you, when you're searching for your next snowboard.

Thanks for reading and if you have any questions or comments please feel free to leave them in the comments section below.