Hello and welcome to my Lib Tech EJack Knife review.

In this review, I will take a look at the E-Jack Knife as a freeride snowboard.

As per tradition here at SnowboardingProfiles.com I will give the E-Jack Knife a score out of 100 (based on several factors) and see how it compares with other freeride snowboards.

Overview of the E-Jack Knife’s Specs

Check out the tables for the E-Jack Knife’s specs and available sizes.

Who is the E-Jack Knife Most Suited To?

The EJack Knife is best suited to those that want to ride big, fast and deep – but also want to be able to express a bit of freestyle flavor when doing so. So, if you’re someone who likes to do a bit of freestyle in the backcountry…. If you’ve ever seen videos of Eric Jackson and your style is somewhat similar, then that’s the ideal candidate for this board.

But even just as a typical freeride board (without the freestyle element) it’s a great choice too, but an even better choice if you throw in a bit of freestyle.

Not for a beginner, at all. Advanced to expert riders only on this bad boy. Maybe a solid, high-end intermediate rider too.

And whilst it has that freestyle taste to it, still not something that’s versatile in the park, IMO. You could go and hit the big kickers in there for sure – but not ideal for anything else in there, IMO.

The E-Jack Knife in More Detail 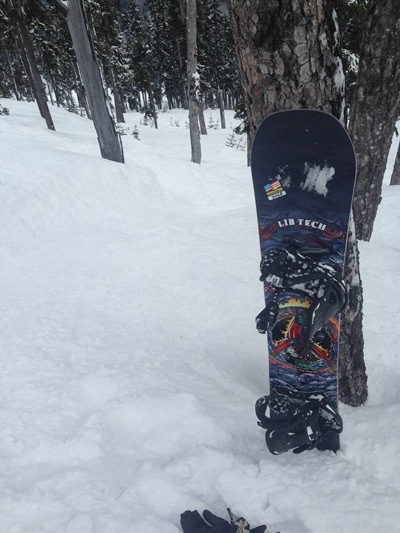 O.k. let’s take a more detailed look at what the E-Jack Knife is capable of.

Conditions: With 27cm of fresh snow in the 24 hours prior it was the perfect day for testing freeride boards (which is what I mostly rode on the Saturday). Visibility (at least the part of the mountain where I was riding) was great. There was a bit of wind (which was surprisingly cold for April) but only noticed it on the chair lift. It was around -8 degrees with wind chill.

It felt pretty good in powder. And no real surprises there. It’s got a long, wide nose compared to the shorter, narrower tail, to help the tail sink and the nose float. And it’s also got a 25mm (1”) setback in its favor.

It’s never going to be as floaty as a board with a good bit of rocker in the camber profile, IMO, but for a board with very minimal rocker, it floated very well.

Really nice board to carve on. One of it’s biggest strengths and the thing I had the most fun doing on this board. Not quite as nice on a carve as the GNU Mullair, which I also rode on the same day, but it’s not really fair comparing carving against that thing!

Relatively agile and was pretty good in the trees, but just a touch behind the Mullair and Never Summer Chairman that I also rode that day.

Doable for skidded turns if you get off your game, but only forgiving of it to a certain extent. Definitely prefers to be up on an edge.

I felt I could really bomb with this board and it could handle a lot of speed without feeling shaky. Not quite to the extent of the Mullair and Chairman, but definitely something you can bomb with.

It felt pretty good riding through crud and over uneven terrain.

And certainly stable on landings and no issues with stability at speed on approaches.

It’s not crazy to ride switch on, but it’s also not a natural switch rider, IMO.

Overall, the EJack Knife is a super fun board for charging, powder and carving – and is a more natural jumper than most freeride boards. So, if you like to get a little freestyle on big mountain terrain, this is a great board – or even if you don’t, it’s still a great choice as a freeride option, IMO.

If you want to learn more about the E-Jack Knife, are ready to buy or want to research prices and availability, check out the links below. If you want to see how the E-Jack Knife compares to other men’s freeride snowboards or want to check out some other options in that category, check out the next link.