Hello and welcome to my Jones Mountain Twin Review.

In this review I will take a look at the Mountain Twin as an all mountain snowboard.

As per tradition here at SnowboardingProfiles.com I will give the Mountain Twin a score out of 100 (based on several factors) and see how it compares with other all mountain snowboards.

Out of the 34 men’s all mountain snowboards that I rated:

Overview of the Mountain Twin’s Specs

Check out the tables for the Mountain Twin’s specs and available sizes.

Who is the Mountain Twin Most Suited To?

Anyone who wants just one snowboard but they want to be able to do a bit of everything on it and ride it anywhere on the mountain. This is the definition of an all mountain snowboard and the Mountain Twin is one of the best at doing just that.

It’s not going to be the boss at all of those things – as one board can’t be the boss at everything. But it will be above average at most things and that’s something that few boards can achieve. So if you only want to have one board but you’re the kind of rider that wants to do everything and go everywhere, then this is one of the best for that, in my opinion.

Not the ideal beginner board – but great for anyone intermediate and above.

The Mountain Twin in More Detail 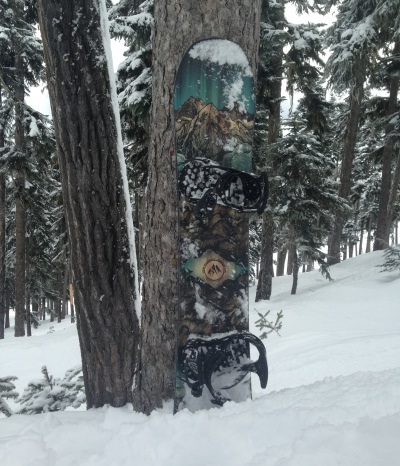 O.k. let’s take a more detailed look at what the Mountain Twin is capable of.

Width at Inserts: 265mm front binding, 266mm back binding – quite wide at the inserts compared to the waist

The Mountain Twin points and shoots like a boss over powder. It floats really well and I felt really confident just going for it over slush and powder. Very little fear of sinking the nose – which made the Mountain Twin super fun in the conditions I had.

It has a 20mm setback stance, just a little bit more nose than tail and has rocker in the profile toward the tip and tail – all of which helps with that powder float.

You can hold a really good carve on the Mountain Twin. And it’s got good edge hold too – on the hard spots that I encountered, it felt really stable with good edge grip with little fear of washing out.

Was also pretty fast edge-to-edge and going through narrow chutes and through trees it felt responsive.

Fairly easy to skid a turn on, when you need to. Not easy like a beginner board but certainly easy for a mid-flexing board.

The Mountain Twin and it glided well on flats and uphills, no problem.

Also it felt stable at speed, which is really where the speed rating is most important. It’s very stable feeling overall and with minimal chatter.

Like everything with this board, it was pretty good over the bumpy stuff. It was really consistent over all types of terrain.

This board is fun for jumps. It feels stable on landings and has decent pop for ollies over rollers and popping off lips.

The board has camber between the feet which extends out beyond the inserts – then it has rocker at the tip and tail. That camber underfoot really helps with the pop and for stability on landings.

I wouldn’t say it’s the most snappy/poppy board that I’ve ridden, but it’s definitely got some pop there, and it’s relatively easily accessible pop – i.e. you don’t have to put too much into it to get the pop out.

The Mountain Twin is a directional twin shape – with a slightly longer nose than tail – and the stance is set back 20cm along the effective edge.

In spite of this, it still felt relatively easy to ride switch and was easy to transition in and out of switch. It doesn’t feel like a true twin with a centered stance – but you can definitely ride it backwards comfortably.

It’s not a jibbing master by any means – but you can take it through the occasional lap through the park and hit some jibs with it. It won’t perform like a board made for jibbing but you can do it if that’s something you like to do from time to time.

It doesn’t butter super-easy but you can butter with it for sure.

I didn’t take it into a pipe but it’s got enough stiffness and good enough edge hold to be really decent in the pipe – and the shape, whilst not perfect for the pipe, is definitely doable for the pipe too.

The core of the 2018 model has been changed and this is supposed to increase torsional response between the feet. It also uses a new ECO-Plastic topsheet in place of the film topsheets they used for the 2017 model.

The 2017 model saw a new core introduced – which was designed to add more pop. That same core was kept for the 2018 model but with a bit of tweak for the torsional flex (as mentioned above).

This board can do everything! It’s billed to do so and it lives up to that billing.

Great float in powder, good stability at speed, carved well, held an edge well, was good over bumps, was easy to ride switch (despite the 20mm setback) and was nice and maneuverable.

Was good down narrow chutes, through trees, in wide open terrain it was fun to let it carve. It was nice over jumps both for the approach, good pop and stable on landings. Was pretty good with jibs and spins too. There was nothing this board couldn’t do. Had heaps of fun on this board.

If you’re interested in the Mountain Twin check out the links below for more info and for current prices and availability. If you want to check out some other all-mountain options or see how the Mountain Twin compares to others, check out the next link.