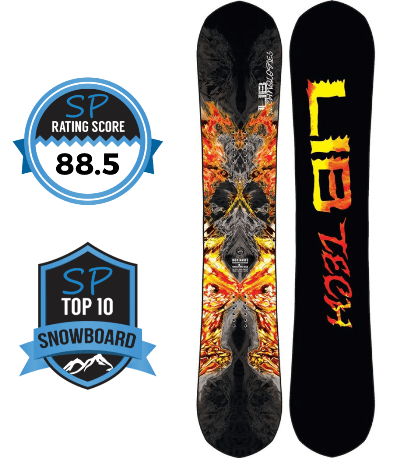 Hello and welcome to my Lib Tech Hot Knife review.

In this review I will take a look at the Hot Knife as an aggressive-all-mountain-freestyle snowboard.

As per tradition here at SnowboardingProfiles.com I will give the Hot Knife a score out of 100 (based on several factors) and see how it compares with other aggressive-all-mountain-freestyle snowboards.

NOTE: The 2020 model was the last model of the Hot Knife.

Compared to other Men’s Aggressive-All-Mountain-Freestyle Boards

Out of the 17 men’s aggressive-all-mountain-freestyle snowboards that I rated:

Overview of the Hot Knife’s Specs

Check out the tables for the Hot Knife’s specs and available sizes in the charts below.

I’m personally not so sure about Lib Tech’s weight recommendations. They’re very broad – and to be honest I can’t imagine someone weighing 120lbs being suitable for a 162cm board! But there you go.

I love their boards but not so much their weight recommendations!

Who is the Hot Knife Most Suited to?

The Hot Knife is quite aggressive. But it’s also got a twin shape and a centered stance. This makes it great for freestyle. And it’s got plenty of pop – so it’s great for jumps.

It’s a mostly camber board (Lib Tech’s C3 Camber – very mild rocker between the bindings), so it’s great for those that love camber but still want to be riding freestyle – but also want to be able to ride the groomers and lay down some good aggressive carves.

If that’s wetting your appetite then this board might be for you.

Not really a jibber – but great to take into the park for medium to large jumps. Otherwise it’s the kind of deck that you want to be ripping it up over the whole mountain, popping off rollers, side hits and ollying off lips – and in between times getting the elbows low for some deep carves.

The Hot Knife in More Detail

O.k. let’s take a more detailed look at what Lib Tech’s Hot Knife is capable of.

Conditions: Choppy and slushy on the groomers. Some pockets of powder off. Some rain later in the afternoon but mostly fine. Visibility good all day.

Not really made for the powder. Have to really put an effort in to keep the nose above the snow in deeper stuff (but I didn’t really find a lot of powder).

The centered stance, the fact that there isn’t much rocker in the profile and the true twin shape make this not a good pick for powder. Not to say that you can’t ride it in powder of course – just that this shouldn’t be your pick if you want to ride powder in the backcountry a lot.

A great little carver. It’s aggressive and you can really get low and up on the edge with confidence.

The edge hold is really good. Though I didn’t really have any icy patches on the day, there were some harder spots and the Hot Knife dug in really well and felt really solid and gripped well.

Quick from edge to edge too.

It was pretty fast and pretty stable at speed. Not the fastest board I’ve ridden but pretty quick none-the-less. Enough so for what you want to do with it and for a twin.

No problems gliding through flat spots or slight up-hills. It has a sintered base (and it was well waxed) so that definitely helps.

Check out the video below for more on the tech.

I had a really choppy day (the downside of riding on a busy Saturday with slushy snow!) and the Hot Knife held up pretty well.

It doesn’t hug the terrain like some boards might – but if you picked some aggressive lines and went for it, it got you through to the flatter spots where you could then open up a carve. Or I just used to the chop as little jumps sometimes too.

Speaking of jumps – this board is awesome!

Really good pop. There’s plenty of camber in the profile which helps with that pop for sure.

Also great for medium to large jumps (and small jumps too but if you’re up to it, then it can handle the bigger jumps). Good for landings and great pop.

Ollies, popping off rollers, ollying over lips etc was super fun on this board.

Really fun for riding switch. It’s a true twin and centered stance board so it feels pretty much the same going in either direction. This also makes it awesome for 180s.

Not a great jibber. You can do it if you want to hit the occasional easy jib but jibbing is not it’s bread and butter. If you do a lot of jibbing then there are better options out there.

Though I didn’t take it in the pipe I think this would make a sick pipe board. It has a centered stance, twin shape, it’s pretty quick and has great edge-hold. All things that would serve it really well in the pipe.

Changes from Past models

If you’re looking for aboard that can have you doing tricks and hitting whatever hits you can find on the groomers, but can still lay down a deep carve and awesome through the jump line in the park, then the Hot Knife might be just right for you.

Definitely not a beginner deck. This board is aggressive. It’s freestyle oriented (except for jibbing) but it’s also aggressive. If you like the sound of the Hot Knife and want to learn more about it – or if you want to research prices and sizing availability, check out the links below.