Hello and welcome to my K2 Niseko Pleasures review.

In this review, I will take a look at the Niseko Pleasures as a mellow freeride snowboard.

As per tradition here at SnowboardingProfiles.com I will give the Niseko Pleasures a score out of 100 (based on several factors) and see how it compares with other mellow-freeride snowboards. 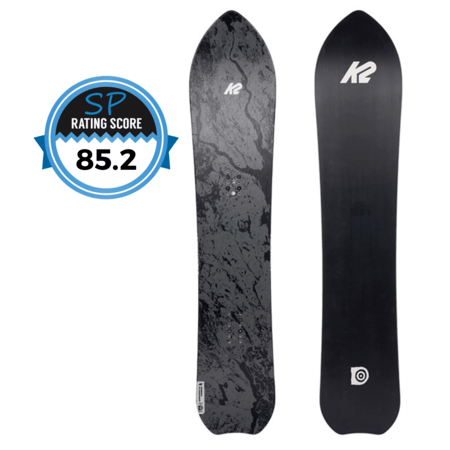 Overview of the Niseko Pleasures’ Specs

Check out the tables for the Niseko Pleasures' specs and available sizes.

Who is the Niseko Pleasures Most Suited To?

The Niseko Pleasures is best suited to anyone chasing powder. A great option to add as your powder deck in your quiver.

It's not bad no a carve either, so you can certainly run it on the groomers, but it's the kind of board, I would buy to add to my quiver and bring it out on powder days.

Not beginner friendly - and would be pushing it for low intermediate too, but anything above that should be fine with it.

The Niseko Pleasures in More Detail

O.k. let’s take a more detailed look at what the Niseko Pleasures is capable of.

Overcast but visibility was fine for the most part, without being unlimited.

On groomer: Groomers were soft as, but not overly slow or anything. Bit of crud to contend with in certain spots, particularly as the day went on.

Off groomer: Pow! Pow! Pow! And pretty dry powder too - not champagne dry, but really nice. Mixture of tracked and untouched powder. This thing is made for powder, and gladly we had a good blast of pow to test it on - and it didn't disappoint. Floated effortlessly in deeper powder and didn't give any hint of nose diving.

And none of that is surprising given its specs. There is a big 22mm of taper, a nose much longer than the tail and a good amount of rocker in the nose. The setback on effective edge (0.75") is moderate, but the setback on the overall length of the board, due to that long nose, is closer to 4".

Carving: It's not a monster carver or anything, but it can lay down a decent carve. The camber is fairly mellow on it and the effective edge isn't huge, being a 151 and with a big nose like that, but given those things, it carved better than I expected.

Ease of Turns/Slashes: Not as easy as I though it would be to initiate turns on the groomers or slash with - it is very wide and that does cause a bit of delay between when you shift your weight to when the edge engages, in my experience.

Also has a feeling of wanting to flat base, when your trying to turn or get it on edge. When you really commit to an edge, it'll hold it there, but felt I had to fight it a little to stop it from reverting to flat basing. Not to a really bad extent like I've experienced with some boards, but there was an element of it there.

Maneuverability at slow speeds: Not un-nimble on groomers, but certainly not lightning edge-to-edge or anything. Again, that width is likely a big part of that. Takes a bit of effort to get that turn imitated and then there's a bit of a delay. It is however, one of those boards that when you get it into powder, it becomes way more agile than it is on harder packed snow.

Skidded Turns: Even though that camber is pretty mellow, still not the easier to skid turns on. That feeling of wanting to revert to flat basing, gives it a bit of a catchy feel, if you get off your game.

Felt better at speed than I was expecting for sure. For how short this board is it felt pretty stable. It's dampness and the fact that it's not a super light board probably helped.

Crud:  Smashed through crud relatively well - and that big floaty nose kind of just soared over top. Again the weight and dampness helped here. It wasn't completely immune to being bucked around though.

Bumps: It's not super quick edge-to-edge as mentioned earlier, but it does have that short tail, which helps in bumps and trees.

It's OK but unexciting.

Pop: Middle of the road pop. In terms of accessing that pop, it requires a bit of effort to extract it, but it's not something that you've got to really throw your weight into and wind up or anything. When you do load it up more, there's a little bit more, but not much more.

Approach: Quite stable for faster approaches and whilst not being super easy to speed check or adjust your line, it's not bad for that either.

Landing: Relatively solid for a 151. Width helps there. Not a stomper though. Fairly forgiving of bad landings.

Side-hits: Not that bad, but nothing amazing or exciting either. And not great for spins off side-hits. Feels more like a board that prefers to be grounded, but you can still give it some air.

This thing is highly directional, so naturally not great for switch.

Getting a spin around was pretty easy even with a bit of extra weight - that low swing weight because of the length did make it easy to spin. But not great for setting up or landing switch and the pop was average.

Yeah, nah. I mean the tip and tail weren't like dead or anything, there's a little bit of flex there, but the tail and nose feel so different to press.

The Niseko Pleasures is a damp little board that loves powder more than anything. Whilst it does OK on the groomers, this is the board I would get as a powder board in my quiver.

If you want to learn more about the Niseko Pleasures, or if you are ready to buy, or if you just want to research prices and availability, check out the links below.