Hello and welcome to my Jones Twin Sister snowboard review.

In this review, I will take a look at the  Twin Sister as an all-mountain snowboard.

As per tradition here at SnowboardingProfiles.com I will give the  Twin Sister a score out of 100 (based on several factors) and see how it compares with other all-mountain snowboards. 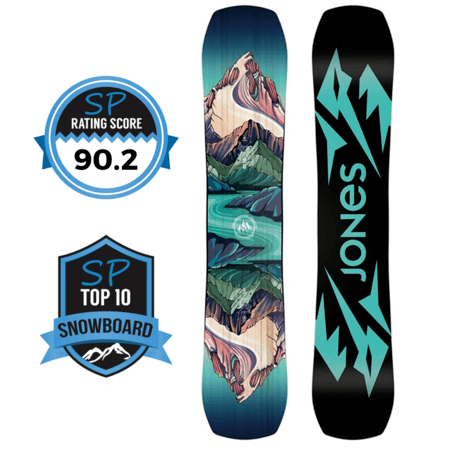 Overview of the  Twin Sister’s Specs

Check out the tables for the  Twin Sister’s specs and available sizes.

Who is the  Twin Sister Most Suited To?

The Twin Sister is best suited to someone looking for that one-board-quiver. If you like to do a bit of everything on a snowboard and go everywhere on the mountain, but you only want to have one board, this is one of the best around for doing that.

It's not a super aggressive ride or anything but it's also not beginner friendly. But fine for anyone intermediate and up.

The  Twin Sister in More Detail

O.k. let’s take a more detailed look at what the Twin Sister is capable of. *based on a small sample size of around 30 women's boards that I've weighed in 2020, 2021, 2022 and 2023 models. The Twin Sister is lighter than normal on the scales, but on snow Jade found it to be feel about normal or if anything slightly heavier than normal.

We didn't have oodles of it to test in, but the Twin Sister handled what we had well. It's not going to be amazing in deeper powder, but not bad either.

It's got some setback - which you can increase of course - and a nose slightly longer than it's tail. That plus some rocker in the nose and tail and it's 3D contour base all help it in powder.

Not up there with the best, but really really decent on a carve. Jade had a lot of fun carving on this board and felt she was easily able to commit to an edge and let the board carve.

Ease of Turns/Slashing: Great on a carve, but also really fun board to slash with as well. Not sure if the 3D contour base helps here.

Maneuverability at slow speeds: Not lightning quick from edge-to-edge at slower speeds, but not bad either.

Skidded Turns: The board doesn't feel catchy at all, making it quite easy to skid turns on.

The Twin Sister felt pretty fast and stable at speed too. And, typical of Jones, had really good glide too.

Crud/Chunder: Jade felt the Twin Sister smashed through crud pretty well - and being damp absorbed the chatter well. Not invincible to getting bucked around a little, but pretty good - and whilst not the easiest in the world to correct when bucked around, not hard to correct either.

Bumps/Trees: Was quick enough edge-to-edge to weave through trees and bumps well - and was good at hugging bumps when going over them too.

This board felt quite stable on approach and it could really stomp a landing. Not much pop but still had fun on some of the side hits despite it.

Pop: Not too much pop overall. Some of it was pretty easy to access though - and when you wound it up there was more to be had, but it wasn't super poppy overall.

Landing: Very stable on landings - could stomp it! But also not unforgiving when you got it wrong.

Side-hits: Not ideal, but still had fun with it on side-hits.

Decent riding switch and transitioning to/from switch was fine too.

Not hard to get the spin around but not super easy. Because there wasn't heaps of pop, it wasn't ideal. But it does setup and land switch decently and all round decent.

If you're a confident jibber you shouldn't have any issues jibbing with this board, but if you're not confident it could be a bit intimidating to jib on.

Feels softer in the tip and tail than the rest of the board. I'd say 5/10 on the tip/tail and 7/10 through the middle of the board. So, it's fairly easy to press. You've got to put a bit of weight into it though.

Overall, the Twin Sister is an extremely versatile board that can ride in any conditions and thrive and take you anywhere on the mountain with confidence.

Whether it's park, powder, ice, groomers, trees or moguls, the Twin Sister is at home anywhere and works really well if you don't want to have two separate boards, but still want to have the option of taking her anywhere.

If you want to learn more about the Twin Sister, or if you are ready to buy, or if you just want to research prices and availability, check out the links below. PAST REVIEWS OF THE TWIN SISTER

Hello and welcome to my Jones Twin Sister review.

In this review, I will take a look at the Twin Sister as an all-mountain snowboard.

As per tradition here at SnowboardingProfiles.com I will give the Twin Sister a score out of 100 (based on several factors) and see how it compares with other all-mountain snowboards. Out of the 20 women’s all-mountain snowboards that I rated:

Overview of the Twin Sister’s Specs

Check out the tables for the Twin Sister’s specs and available sizes.

Who is the Twin Sister Most Suited To?

The Twin Sister is great for anyone looking for a board that does a bit of everything. It's good at everything and very consistent across different terrain.

Ash described it as being a board she felt very in control of, even in the hard conditions that we had at night. Good control and great versatility.

Not for a beginner, but for anyone intermediate or up, who has a wide array of skills and wants one board to do everything on, then the Twin Sister should be on the list.

The Twin Sister in More Detail

O.k. let’s take a more detailed look at what the Twin is capable of.

Conditions: The day started off quite soft and a little sticky, but by the evening time, as it cooled down, it started to harden up. The Twin Sister was the last board, and by the time Ash got on it, things had sped up considerably and was quite firm, with some icy patches in places. *based on a very small sample size of 8 boards that I weighed.

Even though it was the lightest of the boards that Ash tested that day, she described it as the heaviest feeling board on snow. I find this can be the case a lot of the time, and weight feel on snow is significantly effected by other factors.

No real powder to test in, but based on the specs and based on the Mountain Twin, which I have had in powder, it's likely to be very good in there, without being a specialist powder board of course.

Carving: Really nice on a carve and Ash felt it was the best of the 3 she rode that day (the other 2 being the Jones Dream Catcher and YES Emoticon).

Maneuverability at slow speeds: Not as nimble at slow speeds as the Dream Catcher or Emoticon, but not terrible. But preferred faster speeds overall.

Felt very good at speed, and nice and stable. Preferred to be ridden with a little bit of speed.

Not as easy to maneuver through or over uneven terrain as the Dream Catcher was for Ash, but not bad either.

Overall a good board for jumps.

Pop: Not heaps of pop and maybe a little harder to extract vs the likes of the YES Emoticon, but decent enough.

Side-hits: Could be more nimble for trickier approaches and pop could be a little easier to extract, but overall fine for side-hits, without being amazing.

Big jumps: Equally as good, and maybe even a little better for large jumps.

Felt pretty good riding switch. Not going to be perfect but overall pretty good for landing, riding and taking off switch.

Ash found the Twin Sister a little more difficult than the others on the day to get around, but still definitely spinable - and decent for landing/taking off switch too.

Doable without being ideal. An experienced jibber would have no problems, but could be a bit more maneuverable on approach and a bit softer flexing to be better, especially for those not that confident on jibs yet.

Less buttery than the Emoticon (not surprisingly!) and less so than the Dream Catcher too. But certainly can press the tip and tail - just not super easy.

The 2021 model had a few changes. The board is now a little more easy going - it's more maneuverable at slower speeds, but not quite as stable at faster speeds. It's better in uneven terrain, a little more buttery and a little better for jumps overall.

Overall, the Twin Sister is a very good all-rounder - very consistent across styles of riding and in different terrain.

Ash found it to be the best carver, and have the most control out of the boards she rode that day. And couldn't find any real weaknesses with it. She also found it to be very smooth and held a great edge in harder conditions.