Hello and welcome to my Capita Pathfinder snowboard review.

In this review, I will take a look at the Pathfinder as an all-mountain snowboard.

As per tradition here at SnowboardingProfiles.com I will give the Pathfinder a score out of 100 (based on several factors) and see how it compares with other all-mountain snowboards. 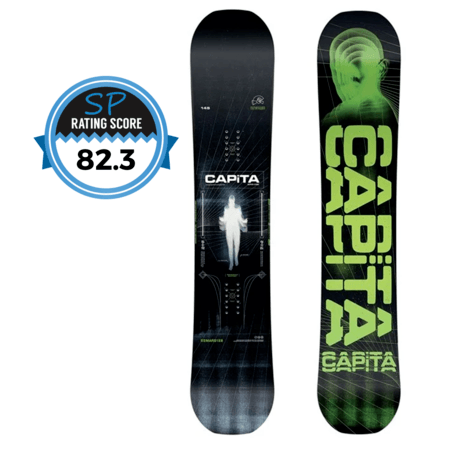 Overview of the Pathfinder’s Specs

Check out the tables for the Pathfinder’s specs and available sizes.

Who is the Pathfinder Most Suited To?

The Pathfinder has the specs of an all-mountain board (at least how I typically classify them) but has an overall feel closer to an all-mountain freestyle board. The softer flex and snappy light board is easy to throw around, butter and plays well in the park too.

It can still lay down a pretty good carve, particularly for how soft it is, though.

And despite how camber dominant it is it's quite an easy board to ride and pretty forgiving of skidded turns. So if you're a beginner but wanting to start out on a camber board, this board is a great option for that.

Ideal for someone looking for an all-mountain to all-mountain freestyle board, likes their board softer flexing, but camber dominant and has a smaller budget (really reasonably priced).

The Pathfinder in More Detail

O.k. let’s take a more detailed look at what the Pathfinder is capable of.

Conditions: Sunny, not a cloud in the sky - 100% visibility.

On groomer: Perfectly groomed to start and got a little choppier as the day went on, but smooth groomers for the most part. Overall mid-firm snow. Definitely not icy and wouldn't call it hard either. In between medium and hard.

Off groomer: Initially looked like it would be a little crusty but actually quite good. That 4cm (1.5") had filled in the tracks from yesterday and was soft on top. But not dust on crust. Underneath was pretty soft too. All good! Really snappy feeling from this board. It's light, agile, springs well out of turns and has nice easy pop.

Did fine in the shallow stiff we had, but if it was deeper wouldn't be amazing from feel. And from specs, it's a little directional which helps, but with a virtually all camber profile and only being very subtly directional, it's not going to be an amazing option for the deeper days.

Carving:  Could lay down a real nice carve for how soft it is (and given I was riding the 153). Not something that absolutely rips a big high speed, wide arcing carve, but fun to carve on, particularly for shorter carves at lower speeds.

Turning: Really easy to turn and fun to turn on. Good spring out of turns. Almost feels like it turns too far sometimes though, like it wants to spin you into switch even when you're not wanting it.

Maneuverability at slow speeds: I found this board super nimble when riding slow. Part of that was size, but even in a longer size (based on riding other boards in different sizes) this board would be nice and nimble at slow speeds.

Skidded Turns:  Despite all that camber, skidded turns were really easy on this board. Part of the reason I think this would be a great option for a beginner who wants to start out with camber.

Better than I thought it would be for the 153, with that soft a flex. Still does get a bit wobbly when you really open it out, and the groomers were pretty smooth on the day, so that certainly helped too - and does feel the chatter - so not a speed demon, but took a higher speed than I though it would, to start to feel unstable.

Crud: It gets a bit bucked around in crud - doesn't smash through it. I didn't have a lot of crud to content with on the day, but what was there did throw the Pathfinder off pretty easy - but it was super easy to correct with how nimble it is.

Bumps: Flexes easily with bumps when going over them and weaving through them it was a champ! Really nimble and quick edge to edge at slower speeds - a fun ride in the trees.

Landing: Not super solid but decent enough stability on landing off 20-30 foot jumps. Anything bigger a little more sketchy though.

It feels pretty good riding switch. It's not perfect but it's not bad. The only real complaint I had was with it trying to overturn a bit - which felt worse when riding switch.

Really easy to get the spin around (some of that was down to size, but would still be a n easy spinning boar). Setting up and landing switch pretty good too. Light and easy to access pop. A little overturn on landings though. Also hitting bigger tricks not as suitable.

Pretty good on jibs. I felt confident hitting jibs on it and I'm not an overly competent jibber.

Not as buttery as I was expecting for it's flex and size, but was still pretty easy to butter on. Certainly easier than the Outsiders that I also rode that day, but not as buttery as my control board (Lib Tech Terrain Wrecker).

Overall, the Pathfinder is a super affordable all-mountain to all-mountain-freestyle board that's overall more playful than precise but it's not overly loose or anything and has a camber dominant feel, giving it a snappy, springy, easy pop feel to go with it's playfulness.

Not for those who prefer the steep and deep but for a playful, poppy all-mountain ride or even park board, this one is really fun - and won't break the bank.

If you want to learn more about the Pathfinder, or if you are ready to buy, or if you just want to research prices and availability, check out the links below.