Hello and welcome to my Burton Pow Wrench review.

In this review, I will take a look at the Pow Wrench as a mellow freeride snowboard.

As per tradition here at SnowboardingProfiles.com I will give the Pow Wrench a score out of 100 (based on several factors) and see how it compares with other mellow-freeride snowboards. 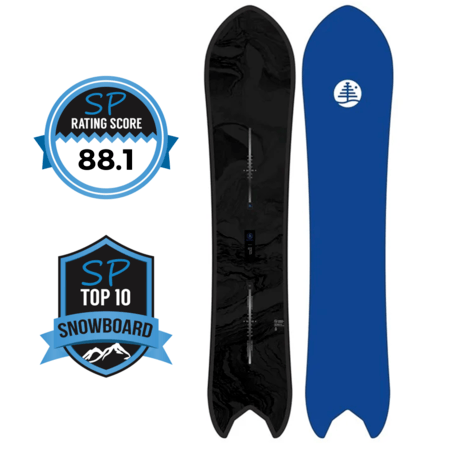 Overview of the Pow Wrench’s Specs

Check out the tables for the Pow Wrench's specs and available sizes.

Who is the Pow Wrench Most Suited To?

The Pow Wrench is best suited to someone looking to add a powder board to their quiver.

Whilst it's not dreadful on hard snow, it's not a board I would get as a daily driver, but for powder days, particularly if you're going to be spending a good amount of time in the trees, that's where the Pow Wrench will come into its own.

A pretty easy going ride, but I'd still say not for beginner, but fine for intermediate, even low intermediate riders.

The Pow Wrench in More Detail

O.k. let’s take a more detailed look at what the Pow Wrench is capable of.

Conditions: Cloudy and quite windy too. And a chilly wind. 25kph (16mph) winds

On groomer: Slushy and slow for the most part. Not super slow or anything, but a little slow. Some (but not many) icy patches underneath the slush on steeper sections. *based on a sample size of around 100 models that I’ve weighed in 2019, 2020, 2021 *& 2022 models. If I could do grams per surface area, this would be a more accurate measure, but since not all brands publish surface area (and I don't have the tools or knowledge to work it out), I can't unfortunately.

It's on the heavy side when you look at grams/cm, but it's a wide board, so the surface area of the 152 is more like the surface area of a regular width 157-158 or something like that, at a guess. Grams/cm would then be much closer to the average. And on snow it felt normal in terms of weight.

More damp than chattery for sure. That extra weight probably helps there too.

More smooth than snappy. This is a board that likes to stick to the ground and enjoy a smooth cruisy, surfy ride.

Unfortunately didn't have any on the day because this thing screams powder. Even on firm snow, I could feel how well this board would float - and the specs back that up too.

Carving: Not really one for big carves, particularly not on firmer snow. You can lean into a bit, but not ideal for big arcing high speed carves.

Turning: Really fun board to turn on. It's got an easy to turn feel. I would describe this as a "turny" board.

Maneuverability at slow speeds: Nice and nimble and super quick to whip that tail around in tight spots. Even with the extra width (which I usually find to be inhibitive to quick turns at slow speed) it still felt nimble.

Skidded Turns: Felt marginally more catchy than my control board (Lib Tech Terrain Wrecker). Not super catchy at all overall but just that tiny bit more than my Terrain Wrecker (which I find is really forgiving of skidded turns).

It's never going to be a speed demon at the size you get it in and with that flat-to-rocker profile and the flex and everything - but it can handle a bit of speed pretty well.

And the base had really good glide to it as well, I found. Which really helped in some slight uphill sections in the trees where I felt I wasn't going to have enough speed up certain sections, but it got me there.

Crud: Doesn't smash through but glides over top nicely. Confident in crud on this thing. And even though it didn't feel like it smashed through that well, it didn't really get bucked around either - I think the extra weight helped there. It's a board that likes to stay on the snow, even when it's not smooth.

Bumps: Really really good in trees, just able to flick that tail around to maneuver through those bumps easy. Nice and nimble and really fun. And hugged the bumps well going over top of them.

The Pow Wrench starts at around 4:35 in this video.

When I said this board prefers to stay on the snow (and does a really good job of it) it doesn't make for much of a jumper.

Approach: It's fine on the approach. Relatively stable, without being ultra stable, and  easy enough to make corrections, speed checks etc.

Landing: Forgiving of errors, but definitely not a stomper.

Side-hits: Was quite fun for sidehits. The approach was good - but lacked pop to make them really exciting.

Small jumps/Big Jumps: Best for small to medium jumps, but not great for any really.

Feels weird riding this thing switch. When the tail's in front it feels too light and whippy. Feels like it wants to whip around to get that big heavy nose back out front.

It's got a size that made it a little easier than it otherwise might be for spinning. But landing and setting up switch isn't great and that lack of pop doesn't help - as well as being quite heavy.

A very uneven feel between pressing the nose and tail (not surprisingly). Easier to press the nose - it's a little softer and there's more there to press off. But much harder off the tail. And overall feels a bit strange, given how different the nose and tail feel.

Overall, the Pow Wrench is a fun little board that would be a great addition to someone's quiver as a powder/tree board.

Unless you only ever ride in powder and trees, then it's not going to be the best daily driver - but after a storm, particularly if you're somewhere with good trees, this is the board I would prefer to have over a lot of others.

If you want to learn more about the Pow Wrench, or if you are ready to buy, or if you just want to research prices and availability, check out the links below.