Hello and welcome to my Arbor Wasteland Camber review.

In this review, I will take a look at the Wasteland Camber as an aggressive all-mountain snowboard.

As per tradition here at SnowboardingProfiles.com I will give the Wasteland Camber a score out of 100 (based on several factors) and see how it compares with other aggressive all-mountain snowboards. 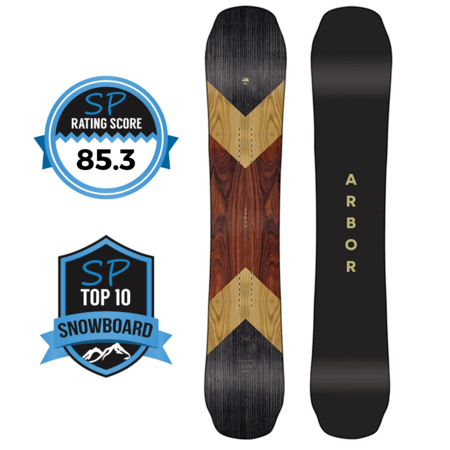 Overview of the Wasteland Camber’s Specs

Check out the tables for the Wasteland Camber's specs and available sizes.

Who is the Wasteland Camber Most Suited To?

The Wasteland Camber is best suited to anyone looking to carve up the groomers, smash through the crud and lay down big carves. Suitable for the park, if you're an experience park rider and better suited to jump line.

Not great for powder and not a beginner board. You'll want to be at an advanced level to ride this thing, IMO.

The Wasteland Camber in More Detail

O.k. let’s take a more detailed look at what the Wasteland Camber is capable of.

On groomer: Crunchy, with some icy chunder for the most part. Some softer patches. Hard but not bullet proof.

Off groomer: Crunchy/icy for the most part. None to test on on the day, but based on specs not going to be great in powder. The nose is a little longer than the tail - and there are the uprise fenders that help, but otherwise, nothing else that really helps it with powder float - i.e. it's centered in stance, there's no rocker to speak of, no taper or anything like that - and the nose is only subtly longer than the tail.

Carving: Can lay a mean high speed carve on this board.

Ease of Turns/Shashes: Not quite as well suited to slashes. Takes some effort to initiate turns and doesn't like to slash as much as it likes to be on edge. Prefers longer drawn out turns to short sharp ones.

Maneuverability at slow speeds: It's not terrible, but as mentioned above, it prefers longer, bigger turns over short sharp ones - and prefers to be ridden fast rather than slow.

Skids: It's nothing super catchy or anything, but it's not that forgiving of skidded turns either.

Nice and fast and really stable at speed. Could really bomb with confidence on this board. Good glide on the base too.

Crud: Smashes through it without getting knocked around at all. Remains stable crashing through the crud.

Bumps: It's not super fast edge to edge particularly at slow speeds - it's not terrible or anything either, but gotta put some muscle in to get those shorter/sharper turns in.

Overall it's good, particularly if you're experienced with jumps.

Pop: There's a decent amount of pop there but it takes a good bit of winding up/effort to extract it.

Approach: Nice and stable for faster approaches for sure. A little harder than some to adjust and speed check, but nothing terrible in that respect.

Landing: Super solid landing platform. Not completely forgiving of bad landings, but not super punishing either.

Side-hits: Not bad, but not great. I prefer a little more agility and easy access pop - but it's still fine, particularly for easier approach side-hits.

Felt pretty good riding switch - and no surprise, given it's a centered stance and a directional twin shape.

It's a little on the heavy side and takes some effort to extract the pop - making it not as suitable for spins, particularly smaller spins - but for bigger tricks it would work better - it's good for taking off and landing switch - just a bit more effort to get the spin around. 3.5/5.

The Wasteland Camber is a warrior. It smashes crud out of the way like it's nothing, bombs really well and can lay down a mean carve.

It's not as good for the park, unless you're hitting bigger jumps and are already very capable in the park - though it does ride switch really well.

Doesn't excel in powder, but for those looking for something to rip the groomers on and take no prisoners, this a fun aggressive ride.

If you want to learn more about the Wasteland Camber, or if you are ready to buy, or if you just want to research prices and availability, check out the links below.