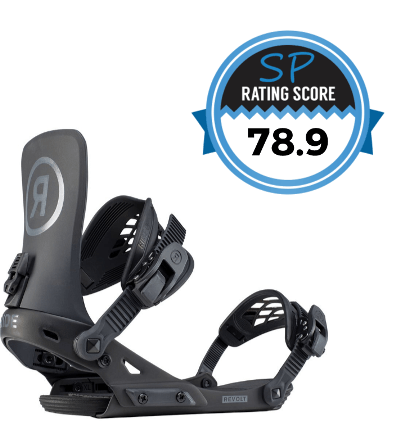 Hello and welcome to my Ride Revolt snowboard bindings review.

In this review I will take a look at the Revolt’s as freestyle snowboard bindings.

As per tradition here at SnowboardingProfiles.com I will give the Revolts a score out of 100 (based on several factors) and see how they compare with other freestyle bindings.

NOTE: The 2020 model was the last model of the Revolt, so this review will no longer be updated.

Compared to other Men’s Freestyle Bindings

Out of the 23 Men’s Freestyle bindings that I rated:

Check out the table below for the available sizes for the Revolt.

Who are the Revolts Most Suited to?

The Revolts are best for anyone looking for freestyle bindings that also have enough response to ride all-mountain – and to do that with a reasonable price-tag. Not for the super budget conscious – but the price is pretty good.

I didn’t feel they were anything to write home about but feel solid enough and would be reliable, I would say.

Not purely for beginners – just a touch stiff for absolute beginners but would be fine for high-end beginners and intermediate riders.

And not for those that need something quite stiff and supportive and something that will provide a lot of response.

The Revolts in More Detail

O.k. let’s take a more detailed look at what the Revolts are capable of.

Conditions: Plenty of fresh powder around. Had been puking it for a good few days leading up. Still bumpy and chundery in places as it was a Saturday but mostly soft good conditions on the groomers and plenty of powder off.

They felt similar to the Ride EXs I rode just before them – but just a touch stiffer – around 5/10, or maybe 4.5/10. The highback is quite flexy when you twist it (made of urethane) so you get plenty of lateral movement – probably more of a 3/10 in that sense. But overall, how the bindings feel to ride, I’d say more like 4.5 to 5.

For the 2019 model, the highback has changed to a slimeback – which is super-soft on the top half of the high back.

Middle of the road in terms of response. Pretty good, but not amazing.

Better board feel than the EXs, but not quite as good as the Rodeo’s but close. They have a mini disc which really helps to reduce that deadspot.

The Revolt has heel cup adjustability, which I like as it makes it a lot easier to get your boots centered to achieve even toe and heel overhang.

It also has tool-less adjustments for centering the ankle strap & toe strap and for high-back lean. Which is pretty standard these days on most bindings, except for lower end bindings, but it’s still good to see.

But as for the tool-less adjustments for the ankle and toe strap, I’m undecided on though. In theory I like them, because they don’t require you to unscrew and re-screw anything – they’re just a flip up, flip down thing. But I find that you’ve got to give them a good bit of force to release them (which may be even harder on really cold days). They may get easier over time – but then I’m not sure if that’s a good thing – since they’re not screwed in, you kind of want them to be tight – but I haven’t owned these, so I don’t know how they go over the long term.

The Revolts felt really quite damp – as a lot of Ride bindings tend to be. So, that’s a big tick there for freestyle riding, IMO. Good cushioning in the footbed and also the urethane highback helps to dampen the ride even further.

They’re not the smoothest ratchets on the market, but they’re not bad either. This is only a small thing in my book anyway.

Pretty comfortable. Straps are nice – not super nice, but pretty good. And that wedgie footbed helps too – gives you canting, which I like. That canting also adds to the pop, so that’s something I liked about these – and about ride bindings in general – I think they have canting in all, or at least a majority of their bindings.

Not heaps of ankle support to be fair. A looser feeling in these – but that can be a good thing if that’s what you’re looking for – you get that more surfy feel. But if you like a really supportive feeling for your ankle, they may feel a bit loose for you.

There have been a few changes for the 2019 model:

The 2018 models are pretty much the same as the 2017 models, except for the high-back which has been tweaked. But it’s still urethane.

It’s not a binding that had me excited but it’s a solid binding that will get the job done. And it’s a quality build, especially for the price – and whilst I don’t rate  for durability, it did feel like something that would last. If you’re interested in learning more about the Revolts, are ready to buy or want to research prices and availability, check out the links below

If you want to see how the Revolts compare to other freestyle bindings or want to check out some other options, check out the next link.