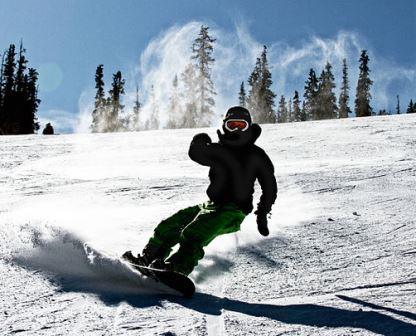 What is the difference between freeride vs all mountain snowboards?

To answer this question let’s first take a look at the difference between what freeriders and all mountaineers like to do on the mountain.

There are some distinct differences here so the snowboards that each will choose will need to have different characteristics to be the best tool at their disposal. Note that there are sometimes different definitions for what terms like “freeride” and “all-mountain” are. These are based on my definitions.

Freeriders are sometimes also known as big mountain riders. This is because they like they’re riding epic. Their home is in the backcountry, riding chutes, tree runs, steeps and anything else that will get their adrenaline going in a big way.

The most extreme freeriders can tackle some pretty hairy and demanding terrain.

The freerider doesn’t even give a second thought to the park, or riding switch or anything else along those lines – and if they do they have a separate board to tackle that part of their snowboarding repertoire.

Whether those other things be cruising the groomers, riding some freestyle either in the park or on the mountain or riding the pipe.

The all-mountaineer wants one board that can do-it-all because they want to be able to do everything in one day if that’s what they feel for – and they don’t want to be changing boards part way through the day.

Because of these differences freeriders want very different specs in their snowboards compared to all-mountaineers. Of course, you might also be looking for a freeride board as part of a quiver. You may be the type of rider that likes to do a bit of everything, but would prefer to have 2 (or more) different boards, depending on where you’ll be riding, how you’ll be riding, what the conditions are and who you are riding with. An all-mountain board is typically a great option for those that only want one board and want to be able to do a bit of everything on that board.

Let’s take a look at the following specs and see the differences between a typical freeride board and typical all-mountain board:

Generally speaking freeride snowboards will have a medium-stiff or stiff flex. This is usually anywhere from a 7 out of 10 to a 10 out of 10 (with 1 being the softest and 10 being the stiffest).

The reason for this is that stiffer flexing boards are faster from edge to edge at high-speeds, have better edge-hold, are more stable at high speeds and can tear through rugged terrain better than their softer flexing counter parts.

This type of flex is used for all mountain boards because they need to make a compromise to be able to do everything you can throw at it.

It needs to have good edge-hold, stability at speed, response etc as per the freeride specs above but also needs to have a bit of forgiveness and flex for landing jumps, hitting jibs, butters, m, tweaking grabs or just for a less aggressive, playful, more casual feel that some riders prefer. And for maneuverability at slower speeds, when riding more casual and slowly, that softer flex really helps.

Freeride boards nearly always have a directional or tapered directional shape. These shapes are tuned to have you riding optimally in one direction. There isn’t any consideration for switch riding (it’s still possible to ride switch on any board, just not as easy).

A board can be directional in a number of different ways, including:

Again this is a compromise between riding well in one direction on challenging terrain and being able to ride, take off and land switch more comfortably etc.

Because there are a lot of options for shapes in all mountain boards you can tailor what you get to more closely fit your style. That is, if you are a more aggressive all mountain rider then you might want to pick something with a directional shape. And if you’re more freestyle oriented, then a true twin shape might be an option – though in most cases that means you’ll be getting an all-mountain-freestyle board.

Most all-mountain boards will have a directional-twin shape. The most common thing that makes a directional twin shape is a longer nose than tail.

Freeriders usually choose a longer than “normal” length. The reason for this is that that extra length increases edge-hold, speed and stability at speeds and also helps with float in powder.

A rule of thumb is to find your “standard length” (see link below) and then add 2-4cms.

All-mountaineers are typically somewhere in the middle of freeride and freestyle and the same is the case with length.

An all mountain rider doesn’t want to go too short and miss out on the edge-hold, stability and float of a longer board but they also don’t want to go too long.  Going too long can make the board more difficult/less suitable for performing freestyle tasks such as spins, butters, side-hits – and can make riding the board at slower speeds more cumbersome/less nimble.

An all-mountaineer should try to go with what I like to call the “standard length”.

The main reason for this is that the setback allows the board to float much more effortlessly in deep snow – and a lot of riders prefer a bit of setback for carving too.

Whilst freeride boards are usually 20mm+ and freestyle boards are centered 99% of the time, all-mountain boards, you guessed it!, tend to sit somewhere in the middle.

Any board can have any camber profile. However, some are theoretically more suited to particular tasks.

The reason for this is that there is camber between/under the feet which adds stability and edge hold and there is rocker towards the tip, which aids float in powder. With stability, edge-hold and float in powder being 3 of the mainstays of freeriding, then it makes sense that this is the most common profile – but any profile is possible. And I’ve ridden some great freeride boards with a hybrid rocker profile (rocker between the feet and camber towards tip and tail), so this is certainly not set always necessarily the case.

Around 50% of the freeride and powder boards I analyzed had a hybrid camber profile.

All mountain boards tend to favor hybrid profiles – as most do, these days (although camber is making a comeback at the time I’m editing this post). This is fairly evenly spread between hybrid rocker, hybrid camber and flat-to-rocker (though the latter is typically mostly found on beginner all-mountain boards). You can get them in every profile but flat, continuous rocker and traditional camber profiles are less common (with camber making more of a comeback recently).

Check the link above for a more detailed look into camber profiles.

Finally we come to the base of the snowboard.

Freeride boards almost exclusively come with sintered bases. This is part of the reason freeride boards tend to be more expensive than their all-mountain and freestyle counterparts.

In fact, I would go as far as to say there’s no point in getting a freeride board with an extruded base. Don’t get me wrong, sometimes an extruded base is actually better (but often just with park or jib boards), but just not in the case of freeriding.

You’ll find plenty of all-mountain boards with a sintered base and plenty with an extruded base. Though extruded bases are typically reserved for cheaper models or more beginner models.

In my opinion it’s preferable to go with a sintered base if you can afford it. If you are looking to get a cheaper board then you may have to settle for an extruded base. Though there are other considerations. Check out the link below to help decide which base is best for you.

O.k. well there’s my take on what the main differences are between freeride and all-mountain snowboards.

I hope this has helped to make the difference easier to understand. Any questions or comments, as always, very welcome in the comments section below.

By Zach Dischner (First Turns) [CC BY 2.0], via Wikimedia Commons