Hello and welcome to my Arbor Swoon Rocker review.

In this review, I will take a look at the  Swoon Rocker as an all-mountain snowboard.

As per tradition here at SnowboardingProfiles.com I will give the  Swoon Rocker a score out of 100 (based on several factors) and see how it compares with other all-mountain snowboards. 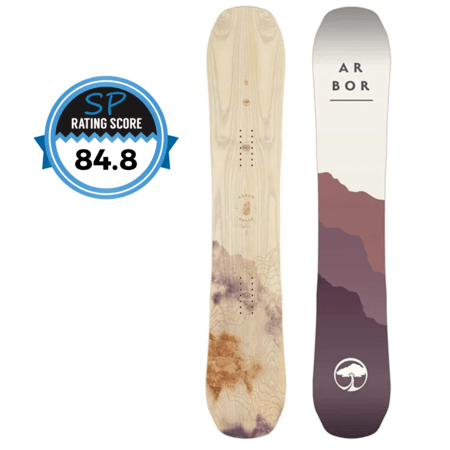 Overview of the  Swoon Rocker’s Specs

Check out the tables for the  Swoon Rocker’s specs and available sizes.

Who is the Swoon Rocker Most Suited To?

The Swoon Rocker is best suited to someone looking for a one board quiver that can go anywhere and do anything and one that's pretty forgiving and easy going in terms of it's camber profile and un-catchy nature, but that is burly enough to still handle some speed and crush through crud.

The Swoon Rocker in More Detail

O.k. let’s take a more detailed look at what the Swoon Rocker is capable of.

Sunny! Barely a cloud in the sky and felt nice and warm.

On groomer: Icy in patches, medium in patches and slushy in patches. Snow quite messy/cruddy. GOt softer and more slushly as day went on.

Off groomer: Icy/crunchy for the most part particularly on particular sections - but certainly not bullet proof and in places started to soften up quite a bit as the day wore on. *based on small sample size of women's boards that I've weighed.

So, a little lighter than normal. On snow Jade found it to feel about normal weight on snow.

We had no powder to test in on the day, but based on specs and experience with other Arbor boards, the Swoon Rocker would be above average in powder. It's got plenty of rocker to help keep you afloat and a nose that's longer than it's tail. There's no taper and no setback (though you could set it back on powder days), so it's not going to be a powder queen, but it's going to be decent in pow.

Turning: Turn initiation was easy and turned with with relatively little effort.

Carving: For a rocker board, it actually carved quite well. Jade said she was able to dig in her edge and really commit to carves.

Maneuverability at slow speeds: Not super agile at slower speeds. Not slow either, but not ultra good for short sharp turns.

Skidded Turns: No catchiness and no surprise with all that rocker. There are of course easier boards to skid turns on, like softer beginner boards with a lot of rocker, but was still very much in the un-catchy category.

Jade found the Swoon Rocker to be nice and stable at speed, she was able to open it out with confidence with minimal chatter or wobbles.

Crud: Jade found the Swoon Rocker smashed through and over crud really well - better than expected.

Bumps: Required a bit of effort to get edge-to-edge quickly in tighter spots. Not like turning an ocean liner by any means, but not super agile in the tighter spots. Hugged the bumps well though, with the right technique.

Overall decent for jumps, but nothing overly exciting.

Pop: Not a lot of pop. Compared to the Cadence Camber that Jade also rode that day, she found the Swoon Rocker a little lacking. It wasn't hard to extract but not super easy either, and when winding up didn't give a whole lot back.

Approach: Nice and stable for a rocker board.

Landing: Pretty solid on landings too without being a stomper - but had some forgiveness too for those less than perfect landings.

Side-hits: More pop and easier maneuverability would make this board better for side hits, but it wasn't terrible either.

Good for setting up and landing switch, but did lack some pop and liveliness that can make spins much more enjoyable. Still all round decent, but not amazing.

Because of that lack of pop and generally not being super agile at slower speeds, it's not ideal for jibbing. But it's certainly doable, particularly for the more experienced jibber.

Takes a bit of muscle to press the nose and tail. There was some pressability in there, but it wasn't super easy to butter with. The nose and tail are fairly similar, so there wasn't a noticeable difference between pressing the nose and tail, but did take some effort to lock into the press.

Overall, the Swoon Rocker is a very versatile board that can handle a variety of conditions. You can ride it anywhere and do anything on it. It's best characteristics were for speed, cruising groomers and in crud, but you can certainly take it in the park and it should be good in powder too.

If you want to learn more about the Swoon Rocker, or if you are ready to buy, or if you just want to research prices and availability, check out the links below.