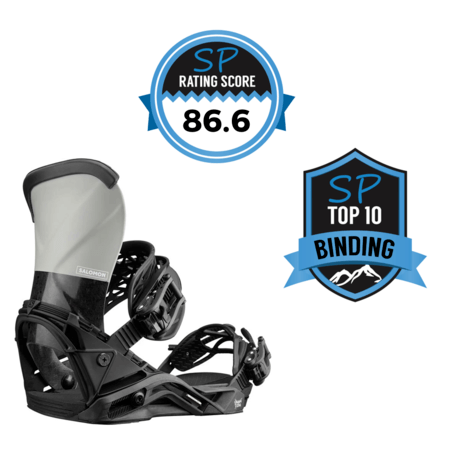 Hello and welcome to my Salomon Quantum review.

In this review I will take a look at the Quantums as freeride snowboard bindings.

As per tradition here at SnowboardingProfiles.com I will give the Quantums a score out of 100 (based on several factors) and see how they compare with other Freeride bindings.

Out of the 13 Men’s Freeride bindings that I rated:

Overview of the Quantum’s Specs

Check out the tables for the Quantum’s specs and available sizes.

Who are the Quantums Most Suited To?

The Quantum's are best for advanced to expert riders who are looking to ride at speed and carve hard and deep. For those that like their bindings stiff and responsive.

Not suitable for beginners at all - way too stiff for that. Also not the best option for the park/freestyle, especially for smaller tricks, buttering, flat-land tricks etc.

The Quantum in More Detail

O.k. let’s take a more detailed look at what the Quantum are capable of.

Groomers were on the firmer side, but not overly hard - and really well groomed - especially first thing, was smooth going and could really confidently bomb and lean into some deep carves.

Got a little cruddy as the day wore on, but was never too bad.

Off-groomer was tracked, but there'd been recent fresh snow a few days prior and there were still some good patches of untracked fresh snow. * from bottom of heel cup to top of highback. Highback itself if 18.5cm (7.28") - it extends below the bottom of the heel cup. Heel cup is quite high.

To me they felt 9/10 when flexing in hand but more like 8/10 on snow. But yeah very little twist in the highback for sure. Baseplate is maybe a little softer than what highback is?

Really freakin good! You could just feel these things hold onto a carve, no matter how fast you were bombing that carve and you could just get the board way up on edge and hold it there for an eternity!

Not super maneuverable at slower speeds, as expected with bindings this stiff.

Not that buttery. Not dead underfoot either but less in terms of board feel vs the Salomon Highlanders, which I also rode that day.

Took a little bit to get the board to pop. Had to really load it up. They weren't as good for popping as the Highlanders and a little less than my control bindings too (Burton Malavita)

Let's Break this Text Up with a Video

There's a good number of adjustments you can make. I just didn't necessarily find it that easy to make those adjustments.

Highback Lean: Yes, but found the way it was down a little tricky and not tool-less

Highback Rotation: Yes, but not independent of highback lean

There's some good padding underfoot. They felt pretty damp and absorbed shock and chatter well. About the same as the Highlanders. Perhaps that flexible heel loop also helps with the shock absorption?

Ratchets are nice and smooth to work with and make it nice and easy to get in and out of them.

Overall decent comfort with a couple of small things.

Ankle Strap: Really nice ankle strap, that I found conformed to the boot really well and not even a hint of any pressure points

Highback: I found I get a little bit of calf bite from the highback. Part of that was probably that I had a little more forward lean on that I normally would and part of it was probably how stiff the highback is. But I have ridden highbacks as stiff without calf bite, so that's one complaint I had.

Really, really good in terms of ankle support.  Ankle felt securely locked in place and gave me the confidence to really get deep on carves with these bindings.

I found the Quantum's made my board a better carver - so if you like to carve aggressively and bomb hard, then the Quantum are well worth checking out.

If you’re interested in learning more about the Quantums or want to research prices and availability check out the links below. Past Reviews for the Quantum Hello and welcome to my Salomon Quantum review.

In this review I will take a look at the Quantums as freeride snowboard bindings.

As per tradition here at SnowboardingProfiles.com I will give the Quantums a score out of 100 (based on several factors) and see how they compare with other Freeride bindings.

Out of the 11 Men’s Freeride bindings that I rated:

Check out the table below for the available sizes for the Quantums.

Who are the Quantums Most Suited to?

The Quantums are best suited to anyone who is an advanced rider looking for quick response from their bindings.

Anyone who rides fast and aggressive will appreciate these bindings and they’re also great to give you that response you need for the backcountry, tree runs steeps etc.

Definitely a no go for beginners – too stiff and unforgiving for beginners, these are for advanced and up riders. Also not really suitable for anyone who wants to butter a lot or tweak grabs or that kind of thing.

The Quantums in More Detail

O.k. let’s take a more detailed look at what the Quantums are capable of.

Conditions: Hard packed with icy spots in the morning, then turning to slushy in most places in the afternoon

These bindings are pretty stiff. There not the stiffest out there but they’re on the stiff side of medium stiff or the softer side of super stiff. The baseplate and the high back are really stiff but they have a  flexible heel loop that gives them a bit more forgiveness.

They respond as though they were super stiff though – and you get that little bit of forgiveness in the flex without sacrificing on response, which I thought was great.

If you’re really adept at buttering then you can definitely do it and they’re not the most un-butterable bindings I’ve ridden (thanks largely to the flexible heel loop) – but it’s not really what these bindings are made for.

You can adjust these bindings most of the ways that you would expect from modern bindings – and they’re pretty easy to adjust to. The major thing that they’re missing is forward lean adjustment. This is something I’d like to see on these bindings.

An above average level of shock absorption. They’re cushy enough to be comfortable and absorb shock from jumps etc.

The Ratchets are smooth and they’re generally pretty easy to get in and out of.

The Quantums are comfortable. Not the most comfortable I’ve ridden but sometimes it’s hard to get both comfort and responsiveness. That said, the Quantums do a pretty good job.

They’ve got nice straps that I didn’t notice any pressure points from and they’ve got a decent amount of cushioning in the footbed.

The Quantums also now have a canted footbed which is nice to see included – a canted foobed essentially aligns your ankles, knees and hips better which I find makes the ride more comfortable – particularly towards the end of a long day.

My feet and ankles felt really supported. There’s a nice firm supportive feeling from these bindings.

Overall the Quantums are great freeride bindings with all the response that you would expect from a good freeride binding but also pretty comfortable and shock absorbing with decent ratchets and plenty of adjustability.