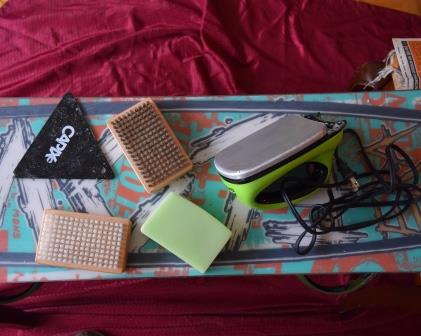 There are 2 main options for waxing your snowboard.

This post is going to focus on how to wax a snowboard yourself, of course. As you don’t need to know anything about paying someone else to do it, except for dropping it off, picking it up and paying for it.

But let’s take a quick look at paying someone else to do it and whether this is the best option for you or if you think you’re better off doing it yourself.

Paying Someone to Wax Your Snowboard

No matter what anyone tells you, this is a perfectly legitimate way of having your snowboard waxed. You will always get die-hards who won’t think you a snowboarder at all if you pay someone to do it for you!

Some reasons that you might want to pay someone else to do it:

There are probably other reasons too – but these are some legit reasons why you might want to pay someone else to do it.

Of course, there are some places that do a better job than others and some that are more expensive than others.

I’ve never seen a ski resort that doesn’t offer waxing services so there’s always somewhere you can get it done, even if there’s nothing around in the place you live.

Waxing Your Snowboard Yourself

O.k. with that out of the way, let’s get into the real purpose of this post. If you’ve read through the above and you’ve decided you want to wax yourself (wax your snowboard yourself that is!), then read on.

First let’s look at some reasons why you might want to learn to wax your snowboard.

How to Wax a Snowboard (Step by Step)

O.k. so you’ve decided to do it yourself. Here are the steps.

Step 1: Get the tools and supplies you’ll need

To wax your snowboard you will need the following:

My setup for the pictures in this post isn’t ideal (mainly because it’s too low) but it does illustrate that you can do it pretty much anywhere.

This is an important first step in the actual waxing process. You want to make sure there isn’t any dirt or grime (or excess wax from a previous waxing) that is going to hinder the absorption of wax into your base.

To clean your snowboard, the most common method is to use a citrus based cleaner.

I don’t personally use base cleaner every time I wax. But you can if you want. Some people say it damages your base over time but I think as long as you use it sparingly and apply it to the cloth and not directly to the base, then it would take a long time to damage the base.

I give it a wipe with a damp cloth, give it a quick scrape and go over it quickly with the nylon brush.

Sometimes you just need something extra to get your base properly clean and that’s where base cleaner comes in for me. This is usually the case come spring time when your base picks up a lot more crap it seems. 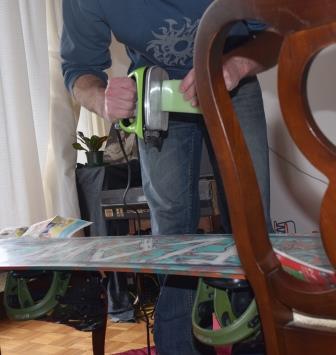 O.k. now that you have all your supplies, are set up in an appropriate space and have cleaned your base you are ready to wax.

If you’ve got a heat gun you can use that – otherwise a hairdryer or using the waxing iron itself will help to dry and heat the base up.

I like to start by moving around the edges of the board first and, once the edges are covered, then zig zag across the center of the board.

The edges of your snowboard will be the driest so make sure to get enough wax on them (you’ll be able to insure this in the ironing process too). Now that you have wax on your board you need to iron it in. This process not only heats up the wax and the base so that the wax can absorb into the base – it also ensures an even spread of the wax.

Some like to wax in a circular motion – some like to go up and down width ways and then as a final pass go along and iron length to length. In my experience one isn’t better than the other. The important thing is to make sure that wax is getting into every part of the base.

Don’t leave the iron in one spot for too long – keep it moving all the time. You don’t want it to heat up one part of the base too much as it could cause damage. That said, you may need to leave the iron in spot for a couple of seconds to get a spot of wax to melt properly – but just be careful not to leave it there too long.

Pay good attention to the edges (not the actual metal edges themselves but the base right next to the metal edges) and make sure they have enough wax on them – these are the parts of base that get the most contact with the snow.

Don’t worry if you get wax on the metal edges. That’s perfectly fine – we will be scraping that off in the next step.

>>This is the iron that I use

Step 5: Let the base cool down

Once you have spread the wax evenly over the entire base you’ll need to let it cool before you scrape the excess wax off.

It will be much more difficult to scrape off the wax if it’s still warm. Also, you might effect the wax job that you just did.

I like to leave it for at least 15 minutes before scraping – so go pour yourself a drink or make a cup of tea or coffee and relax and take a load off for a while!

Step 6: Scraping off the excess wax 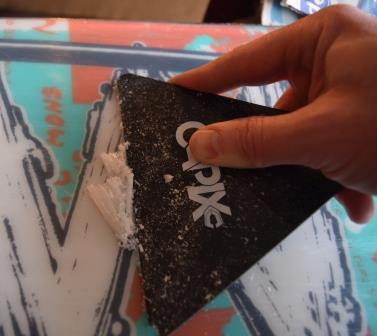 Right, now that your wax has cooled it’s time to scrape.

The wax on the actual exterior of your base will not make your board ride faster – in fact, it will have the opposite effect – it will slow it down considerably. So don’t be tempted to not scrape properly, or you’ll probably end up with a base that was slower than when you started the process!

The only exception is when you are waxing for summer storage – then you do want to leave the excess wax on both the edges and the base.

You know how I said it was fine to get wax on the metal edges? Well, it is fine (and unavoidable really) but it’s important that you scrap that wax off (particularly if you’re going to be in hard/icy conditions). So, I always like to start here.

Snowboard waxing specific scrapers usually have a little notch in the side that makes it easier to scrape edges – but if you’re using something else to scrape you can still get the wax off the edges – it’s just not quite as easy/fast.

Don’t be shy and don’t make the mistake of thinking that you might scrape off some of the useful wax. All that useful wax has absorbed into the base (so long as you let your base cool sufficiently before scraping). So, make sure you scrape off as much of the excess wax as you can (we’ll be fine tuning this in the “finishing touches” in step 7).

When scraping, I find it best to pull the scraper towards you. I find if you start to push the scraper away from you, you greatly increase the chances of gouging your beautiful wax job!

I like to also scrape length ways along the base.

It’s a good idea to have a waste basket to brush the scrapings into – this will make cleaning up at the end much easier.

I couldn’t find the exact scraper that I use online but there are some options for scrapers at the link below. 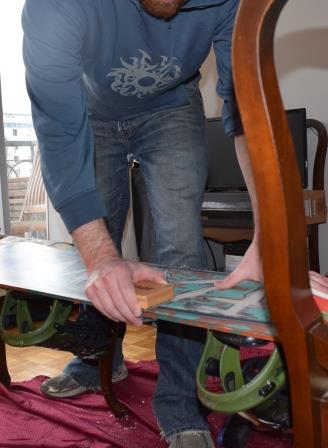 I’ve called this step finishing touches – but this is still an important step that you shouldn’t skip if you want a properly waxed base.

This works to buff the base and helps to get any excess wax that you missed when scraping.

>>This is the Nylon Brush that I Use

>>This is the horsehair brush that I use

You can use a cloth to help to wipe off scrapings before and after using the horsehair brush too.

Or to make it easier…

UPDATE: Since I wax a lot of boards, I’ve since invested in a drill attachment with nylon and horseshoe hair brushes. This makes it a lot easier on the body to do this step – and a lot quicker too. The setup I use is at the link below:

Note that you can buy the Roto handle and the brushes separately, but works out cheaper to buy the kit, I think.

Now all you have to do is clean up and you’re done – you now have a nicely waxed snowboard that’s ready to shred smoothly and quickly and glide you through those flat spots and up-hills!

Check out the video below for a visual representation of waxing your base. This isn’t exactly how I do it, mainly because he has more tools and what not (e.g. the Electronic Buffer!) – but if you want to get a visual look at it, this is the best video I’ve found.

Getting the Tools & Supplies

I’ve bought all of my waxing tools separately. But I kind of wish I’d just bought a kit. The main reason is that then you’ve got a case to put everything into – my stuff just sits loose on a shelf.

>>Here are some options for kits

Personally, I enjoy the process.

And it saves a good bit of money. Of course, this is only really the case if you wax more than once in a season – because you’ve still got to buy the wax and the iron etc and other supplies.

Do you wax your own gear? If not do you think you will in the future? Or do you prefer to have someone else do it for you? Or maybe you don’t wax at all!? Would love to hear people’s waxing experiences/habits in the comments section below.

Related: How Often Should I Wax

Related: Do I need to Wax a New Snowboard