Hello and welcome to my Lib Tech BRD review.

In this review, I will take a look at the BRD as a mellow freeride snowboard.

As per tradition here at SnowboardingProfiles.com I will give the BRD a score out of 100 (based on several factors) and see how it compares with other mellow-freeride snowboards. 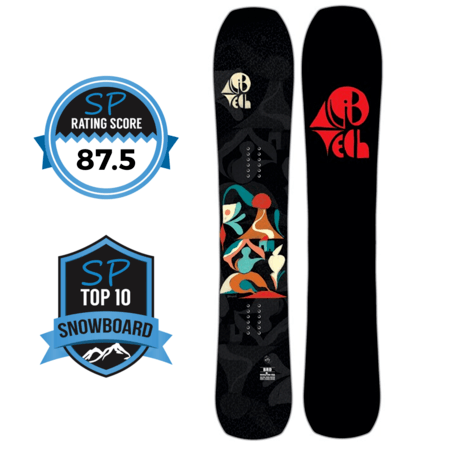 Overview of the BRD’s Specs

Check out the tables for the BRD's specs and available sizes.

Who is the BRD Most Suited To?

The BRD is a great option for anyone looking for a directional freeride board, but doesn't want it to be super stiff or overly demanding.

It's still something you'll want to have good technique already to ride - it's pretty camber dominant and isn't super easy on skidded turns, but it's also not overly stiff and something you can ride all day without fatiguing, if you're not used to stiff boards - or if you're a lighter weight rider for whom a super stiff board feels even stiffer.

Also great for anyone wanting a good board for powder, but one that still does a good job carving up the groomers. It rides well in all snow conditions. It could be a one board quiver for the right rider - if you don't really ride any freestyle or any switch, then it can be a daily driver - or it can work as a compliment to a more freestyle focused board in your quiver.

Nor for beginners and probably not even low-end intermediate riders. But solid intermediates with good technique should have a great time riding this board.

The BRD in More Detail

O.k. let’s take a more detailed look at what the BRD is capable of. Really quite a damp board. Felt very little chatter, relative to other boards, riding the BRD.

I didn't have any powder to test it in on the day, but it's well setup for powder. It's got a really big setback, it's got a really healthy amount of taper, and whilst it's camber dominant it doesn't have an early rise nose. All of that and a nose that's quite a bit longer than the tail - and it's got all the makings of a great board in powder.

Carving: It's not a monster carver, but it's still really good. It's something you can lay down a good carve on and at decent speed.

Turning: It's not effortless to turn. You've got to put a little into it. But when you do it is a fun board to turn on. And you don't have to like throw everything into it or anything, but it's also not effortless.

Maneuverability at slow speeds: It's fairly nimble at slow speeds. Not as much so as my control board (Lib Tech Terrain Wrecker) but a little more so than the Essential Service that I also rode that day.

Skidded Turns: Not that forgiving of skidded turns. And not too surprising given the stiffer, cambered tail.

Good speed and good stability at speed too. Opened it out pretty fast and didn't get wobbly or anything. Also had good glide, which is something I don't typically comment on, unless I notice it being better or worse than normal.

Crud: It handled the crud pretty well. Smashes through pretty well, doesn't really get bucked around much.

Bumps: It's not as agile weaving through bumps as my Terrain Wrecker but it's also not bad at all. Going over bumps it was pretty good at hugging them too, without being overly huggy. But all round a fun board to take into the trees.

Not something I would get if I was wanting to hit jumps most of the day, but not bad for a freeride board.

Pop: Good pop, but a little weird with that noticeably stiffer tail. Particularly for doing ollies and nollies, it can feel a bit weird. Pop not overly hard to access but not super easy either - and that's probably because of that stiffer tail, making it take a bit more effort to pop.

Approach: Stable on faster approaches. Not ultra maneuverable for trickier approaches, but also not like a boat or anything. You can make adjustments when you need to.

Landing: Solid landing base, but forgiving enough too - but can feel a little weird with that uneven flex.

Side-hits: Not ideal but certainly doable.

Doable, as any board is, but quite weird. Everything about this board is directional, so when you switch it around, you've got to get used to riding it in a hole new way.

Not amazing. Harder to access pop - and if you can get past that, then you've got a board that's pretty tricky to setup or land switch. Getting the spin around wasn't difficult and whilst it's a little heavier than the average board, it didn't feel that way.

Pretty weird for butters. Off the tail it was much harder to press than off the nose.

Overall, the BRD is a powder board, that works really well on groomers - and if you're only ever wanting to ride in one direction and want something that's not too overbearing but at the same time can still handle some speed and lay down a carve, then it's something you should have on your shortlist.

If you want to learn more about the BRD, or if you are ready to buy, or if you just want to research prices and availability, check out the links below.