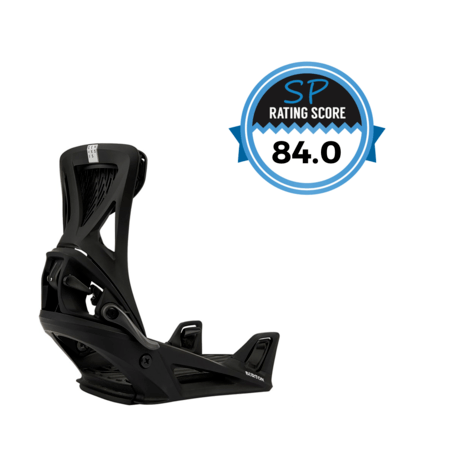 Hello and welcome to my Burton Step On Genesis bindings review.

In this review, I will take a look at the Genesis Step On as all-mountain-freeride snowboard bindings.

As per tradition here at SnowboardingProfiles.com I will give the Genesis Step On a score out of 100 (based on several factors) and see how they compare with other all-mountain-freeride bindings.

NOTE: Since I had to test these with Step On boots, the ratings scores aren't as accurate as they would be, as I didn't have my normal control boots to test with (so any comparisons to my control bindings are tainted because of having to ride these with different boots).

So this review is a rougher indication than the other reviews, because some of what I felt could have been influenced by the differences provided by the step on boots I used to test the bindings.

Compared to other Men’s All-Mountain-Freeride Bindings

Out of the 17 men’s all-mountain-freeride bindings that I rated:

*as noted above, the scoring of these isn't as accurate as it would be for other bindings, as I didn't have a control boot to test them with, given that I had to use the Step On boots for this binding.

Check out the tables for the Genesis Step On’s specs and available sizes.

Who is the Genesis Step On Most Suited To?

The Genesis Step Ons are a great option for anyone looking to strap in without bending over or sitting down but still want really good response.

If I was riding freestyle I probably wouldn't go straight for Step Ons but for carving and cruising the mountain with some freestyle aspects they work really well - I'm just fussy on board feel!

Not for beginners, IMO, just because they feel too stiff - at least with the Photon Step On boots anyway - but intermediate level riders should be fine.

The Genesis Step On in More Detail

O.k. let’s take a more detailed look at what the Genesis Step Ons are capable of.

On groomer: Hard pack. Not icy but definitely rather firm.

Off groomer: A little crunchy/icy in steeper spots but not too bad. Similar to on groomer in most parts. *measured on the top side of the footbed - a little bit of angle down to underside of baseplate. 23cm (9.05") at bottom of baseplate.

So the Genesis Step On is lighter than normal - and that's perhaps no surprise, given there are no straps to add extra weight. The Step On boots were a little heavier than normal - and since you have to go with step on boots, the overall weight was pretty normal.

I am going to guess (the flex ratings haven't come out at time of writing) that these are going to be rated medium flex, given that they share the same name as Burton's Genesis Re:Flex and Genesis EST bindings, but they felt stiffer than that to me. I woudl say about a 7.

But I would also say that this is quite influenced by the boots I was riding too. Not being able to ride with my control boots meant that it was more difficult to detect which was giving me that medium-stiff feel.

To complicate it further, the boots are literally hooked into the highback, so the flex of the boots and bindings is even more intertwined than it would normally be.

In hand it feels like there’s just a hair less twist in the high back versus my Malavitas. Still certainly some twist there, but marginally stiffer in the highback twist. They do feel like they have just a little give when pulling straight back – more so than the Malavita.

They responded really well - was really quick to transition edge to edge and I felt like I could carve harder in these versus my control bindings (Malavita). As is a theme with this review, some of this could have come down to the particular boots - but having the boots locked into the highback was likely an important contributing factor too.

I found they weren't as easy to manage at slower speeds as the Malavita Re:Flex though. They were just a little more awkward at slower speeds, but when riding faster that response was really up there.

The Genesis Step on starts at around 1:58

At first I felt the board feel was pretty average, but once I got a bit more used to the feel it wasn't as bad as I had first thought. I found that I could get a good press in these bindings. But the overall board feel was still less than with the Malavita Re:Flex and other bindings with better board feel.

Being locked into the highback may have contributed to that loss of board feel.

Very similar to the Malavita Re:Flex overall. If I had to say, I think they maybe gave a bit more in terms of total pop, but were a little more awkward in trying to extract it.

Not heaps of adjustability. Not having ankle or toe straps meant having to think about these in a different way. I basically gave points for good ankle and toe strap adjustability, given that you don't have to make any adjustments.

Stance Width: Limited - as per all Re:Flex discs, where you can't run them horizontally.

Highback Lean: Yes, but not tool-less. Takes a bit of figuring out, but you can adjust the highback lean, with a tool.

They felt like they were roughly the same as other Re:Flex bindings, but riding them with different boots it was a little hard to tell. Overall shock absorption wasn't as good as my control setup (Adidas Tactical ADV and Burton Malavita Re:Flex), but that was largely probably down to boots, with the Tactical ADV being very shock absorbing.

Typically this would be a fairly short section - however, given that one of the Step Ons main features is for easy in/out, this section will get a lot more attention than normal.

I can't say anything about the ratchets here - as there are none! The thing that makes these bindings different is how easy to get in and out of them is, without having to strap in - just having to click in - so how easy is it really?

Having a clip to tuck in the cuff of the pants was kinda cool - to keep that out of the way. I don't typically have my pants between my boots and highbacks when riding, but it felt fine.

Clicking in before the lift was easy enough - got it on the second go.

Felt a little weird on the lift, not having an ankle strap, but got used to that pretty quickly.

Clipping in my other foot at the top of the lift the first time was a little tricky and awkward, but I persevered and got it. Every lap I did in them, they got easier and easier to click into, but even by the end of the 8th lap, I wasn't finding it ultra easy.

Didn't get to a point where I could do it on the move getting off the lift. But it did get easier and easier, and I'm sure with a bit more time in them, it would get even easier. But not something that I got used to super quickly.

It was still a little faster than strap in bindings, even though I hadn't fully got it by the end, and there was no need to bend down or sit down - so if that's a thing for you, then that's a big plus for these bindings.

Unlicking was the part I found the most awkward - particularly to start with. I am so used to being able unstrap quickly - and on the move, so this was definitely harder to do than I find strap bindings - at least to start with.

It did get easier each time I did it at the bottom - and again, I imagine it would get even easier, once you got the hang of it - and by all accounts the reports are that it gets really easy, but I still found it a little awkward after 8 laps. So comparatively small amount of time really. I think it was the leaning forward thing that felt cumbersome.

Also if bending down is one of the reasons you are interested in step ons, you still have to bend down to release the bindings. That said, if you get this down to as quick as it looks like most people can get it to, then you would likely be bending down less than when taking straps off.

I do find I can get straps off fairly quickly, and on the move, but theoretically this is only one thing to release (rather than toe and ankle strap), so it should be faster once you get the hang of it.

They felt a very similar comfort level to the Malavitas. Definitely no issues with ankle strap or toe strap comfort!

Padded Footbed: Some good cushioning in the footbed. 1.9m thick. Nothing but padding in the heel - squishy yet reboundy (this should be a word!)

Highback: The hammock back is super comfortable on the calves I find - definitely no calf bite here

With no ankle straps you might wonder how supported your ankle feels! Surprisingly good. Maybe being locked into the highback really helps you to feel supported. I wasn't sure how this was going to feel, but it really did feel fine.

The "ankle strap" on the Photon Step Ons did help too though. I tried without having that done up and my ankle felt less supported. So having that helps - which you don't get on all the Step On boots.

Overall, the Genesis Step Ons are a very responsive binding - particularly for what their flex is supposed to be. If loosing response was a hesitation you had with getting into Step Ons, then you don't need to worry about this - they give more response than you expect.

They take a bit of getting used to the clicking and clicking, but once used to it, I'm sure they are super easy to get in and out of, but does take some practice.

If you want to learn more about the Genesis Step On, or if you are ready to buy, or if you just want to research prices and availability, check out the links below.

>>Burton Genesis Step On at evo.com

>>Burton Genesis Step On at Burton.com

>>Burton Genesis Step On at backcountry.com