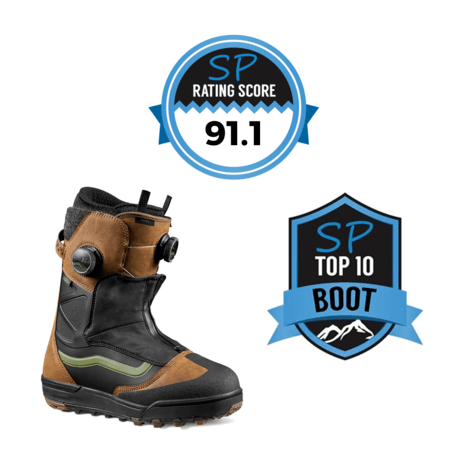 Hello and welcome to my Vans Verse review.

In this review I will take a look at the Verse as freeride snowboard boots.

As per tradition here at SnowboardingProfiles.com I will give the Verse a score out of 100 (based on several factors) and see how they compare with other freeride boots.

Flex Rating: Stiff (6-9/10 depending on tongue stiffeners in or out)

Flex Feel: Stiff (9/10) with all tongue stiffeners in

Overview of the Verse’s Specs

Check out the tables for the Verse's specs.

Who are the Verse Most Suited to?

The Verse are a great option for anyone looking for a stiff boot to freeride in or high speed, aggressive groomer riding.

They're also perfect for those that want to be able to use the same boots on different boards (as most people do). With the removable tongue stiffeners, you can get a noticeably softer feel from them, if you remove them, giving you a very versatile option to use across different boards and different terrain.

The Verse in More Detail

O.k. let’s take a more detailed look at what the Verse are capable of.

Off groomer firm with some soft on top.

Groomers were a nice medium firmness. * Average of a sample of boots I weighed was 1006 grams, so a good bit heavier than the average. They feel like they were built sturdy for sure. Heaviest were 1320 grams and lightest were 740 grams. Stiffer boots tend to be heavier, so for their flex, they aren't massively heavy.

The Verse (like the Vans Infuse) have removable tongue stiffeners. There are 2 per boot and you can have both in, both out or one or the other in. So there's a good bit of tinkering you can do there.

I rode with all the tongue stiffeners in and it was a very stiff feel. 9/10, IMO.

Width: Felt normal - not wide or narrow in the toe box and overall down the foot.

True to Size?: Perfect fit in the 10s. Snug but not painful. Even with more wear these boots would be pretty much ideal in 10 and I'm typically a 10, so I would say true to size for sure.

High or Low Arch: There was some pressure on the top of my feet - but not in a bad way. There wasn't any pressure points as such. More so on my right foot. But overall they felt lower than average in terms of the top of the boot. I have relatively flat feet (especially my left), so they may not be as suitable for those with high arches. But certainly fine for normal arches (as my right foot is).

Really nice on a fast, deep carve. Felt they definitely held the carve more solid and could lean deeper into it versus my test boots (Vans Aura).

So they made the board more carvy and more aggressive than it was before. They did reduce the maneuverability at slow speeds versus the Vans Aura though. Which is pretty typical of stiffer boots. Would be more maneuverable at slow speeds with the tongue stiffeners out though, I would imagine.

The Heel Hold in the Verse is awesome. I had barely any lift at all.

The Double Boa that the Verse uses allows some adjustability between the upper and lower sections, but they're not completely independent. Both Boas work on cranking the ankle in. The left hand boa tightens the lower zone and the ankle and the center boa tightening the upper zone and ankle.

There is a nice velcro strap that straps around the upper part of the liner of the boot, which helps to give a more secure feel higher up in the boot - so you can use this really tight or slightly looser, so get a little more adjustability.

Apart from that, there is also the tongue stiffeners, which allow you to adjust the flex, which is pretty unique and really nice to have if you like to ride softer boots for particular boards or terrain.

I found the Verse nice and comfortable. They were very snug, but snug without giving off any pressure zones and I had no cramping when riding. All round very comfortable boot.

Really nice in terms of shock absorption. Absorbs chatter really well as well as feeling nice on flat landings. Inspecting the sole, they do look/feel like they would be shock absorbing with a nice gel in the heel - and getting them out on snow confirmed that for sure.

Definitely not as much in terms of board feel as in the Vans Aura (my test boots) and less than the Ride Trident too, which I also rode that day. The sole, like the rest of the boot is quite stiff feeling - and it's pretty cush too - so you get those things but loose a little in terms of board feel - but if you're going to be charging super hard in these things, it's not a big factor, IMO.

For Vans boots they aren't massively low profile. Most Vans boots I've measured are lower profile than this one. But they're also not bulky by any means.

With that extra strap on the liner, it’s a bit more to get into and out of, and had to make an effort to get it to a point I could get my foot in there relatively easy. But it’s double boa, so tightening the outer boot was easy.

Then there’s the extra thing to zip up on the outside of the boot. Which isn’t much effort but it’s another step. The zip was a little sticky the first time I tried doing it up, but subsequently after that it was much easier.

So there's a bit going on getting in and out of this boot. But I wouldn't say it was difficult, just takes a little extra time, but not that much, and everything works together really well to get a great feeling fit.

My one small complaint was the tightener on the liner harness - it just feels so cheap and flimsy. Which I thought was quite strange on a boot that was otherwise so sturdy and felt so high quality. This boot is built like a tank for the most part except that one thing. I noticed it on the Vans Hi-Standard 2020, but that's a cheaper boot - I didn't think it would be on the Verse. But that's a small thing.

Apart from the plastic tightener for the liner (as mentioned above under "entry/exit"), these boots are built like a tank. They feel super quality and sturdy and really stiff with all the tongue stiffeners in place.

Can really charge hard in these boots - which made my board more carvy - and they're also really versatile with those tongue stiffeners.

If you’re interested in learning more about the Verse, are ready to buy or want to research current prices and sizing availability, check out the links below. If you want to see how the Verse compared to other freeride, or want to check out some other options, check out the link below.