Hello and welcome to my Nitro Team Gullwing review.

In this review, I will take a look at the Team Gullwing as an all-mountain snowboard.

As per tradition here at SnowboardingProfiles.com I will give the Team Gullwing a score out of 100 (based on several factors) and see how it compares with other all-mountain snowboards.

Overview of the Team Gullwing’s Specs

Check out the tables for the Team Gullwing’s specs and available sizes.

Who is the Team Gullwing Most Suited To?

The Team Gullwing is a great board for anyone who wants one board that is very versatile and can take them anywhere they want to go and ride in any style. It’s one of the better do-it-all boards I’ve ridden.

Also, if you want that one board quiver and like the feel of your board to be slightly on the looser more playful side of things (not in a huge way but just leaning there), then this will suit you well.

Not quite what I’d recommend for a beginner. Just a little too stiff for that. But certainly for an intermediate rider and up – or a higher level beginner rider who is quite athletic, you could definitely ride this.

The Team Gullwing in More Detail 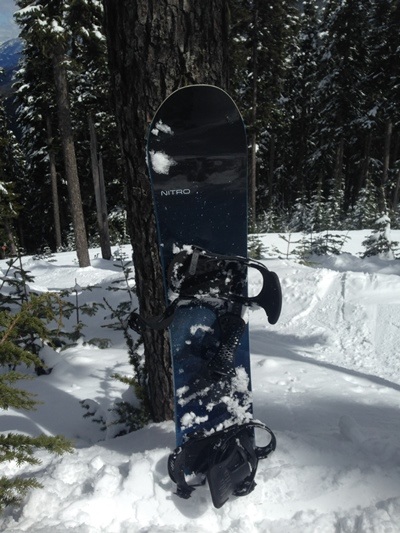 O.k. let’s take a more detailed look at what the Team Gullwing is capable of.

There was a bit of powder left around when I rode this, though not heaps. But what I did find, it did well on. I mean it’s not a tapered, heavily setback board with a ton of rocker in the nose, so it’s never going to be a deep deep powder hound (nor is it designed to be that way)

But it does have a bit of setback and the nose is a little longer than the tail, and the rocker in the profile helps a bit with float – which explains why it felt pretty good in the pow.

In terms of turns, it felt like it had a really good balance between being able to hold a deep wide carve pretty well but could also perform short, sharp turns well. The feel is on the slightly more playful/loose side, rather than aggressive, but not overly loose. It’s a smooth turner overall.

You can skid your turns on it too if you get off your game or your just at a stage that you’re still skidding your turns. Not super beginner easy but pretty close.

Was something that was also pretty agile at slower speeds, which helped in technical spots in the trees. Overall a fun board to take into the trees.

Feels stable when going a good clip. Certainly not an out and out bomber but pretty good – like most things with this board, it can handle a bit of everything.

A good balance between being agile enough at slow speeds and being stable enough at high speeds.

Didn’t even think about it in undulating terrain or in crud – it just takes it in its stride. Very consistent regardless of the terrain.

It’s got reasonable pop and that pop’s easy to extract as well (doesn’t take too much effort to get spring out of it). And landings and approach felt stable. So overall a solid board for jumps, be they in the park or on natural terrain.

Good for spins too.

Totally fine riding switch. Not identical in terms of the shape (directional twin) and has a 15mm setback. But you could hardly feel that when riding or landing switch to be honest.

Certainly not a jibbing star but perfectly fine to take on jibs. I felt comfortable hitting jibs on it.

Butters pretty easily – not noodle board easy, but you can definitely butter with it.

It’s consistent across terrain and capable for any style. The true definition of a one board quiver, this one.

If you want to learn more about the Team Gullwing, are ready to buy or want to research prices and availability, check out the links below. If you want to see how the Team Gullwing compares to other men’s all-mountain snowboards or want to check out some other options in that category, check out the next link.