Hello and welcome to my Arbor Westmark Camber review.

In this review,  I will take a look at the Westmark Camber as a freestyle snowboard.

As per tradition here at SnowboardingProfiles.com I will give the Westmark Camber a score out of 100 (based on several factors) and see how it compares with other freestyle snowboards.

Compared to other Freestyle Boards

Out of the 38 Men’s Freestyle snowboards that I rated:

Overview of the Westmark Camber’s Specs

Check out the tables for the Westmark Camber’s specs and available sizes.

Who is the Westmark Camber Most Suited to?

Can certainly ride the rest of the mountain too – but mostly suited to freestyle when outside the park and favors a tighter turn radius than a long arcing one.

Not really a board for riding powder, but (like any) you can, you’ll just get a sore back leg keeping that nose afloat.

The Westmark Camber in More Detail 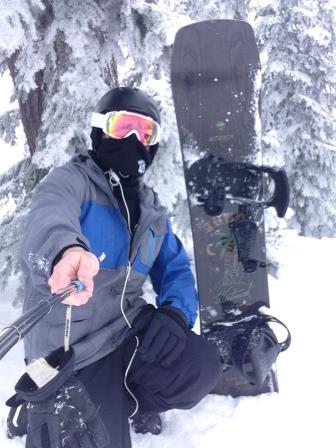 O.k. let’s take a more detailed look at what the Westmark Camber is capable of.

Conditions: Cloudy with flurries but visibility was mostly good – a couple of times it went fuzzy but mostly good. Nice medium-firmness to the snow. Not soft but not hard. Off groomer doable and groomers nice. (March 5th)

Sunny, short periods of cloud, but perfect vis. Good snow conditions. Getting on the slushy side later in the afternoon but all-round good snow (March 7th)

Not great in powder – I didn’t see much of it on the days that I rode it but you can tell from the feel of it – plus the fact it’s a centered, true twin with a full camber profile – that it wouldn’t be the board for deep powder. But that’s not what it’s designed for either.

You can get a good carve going on this but it’s more suited to short sharp carves as opposed to long, wide arcing carves. Naturally prefers smaller radius turns.

Surprisingly ok for skidded turns for a mid flexing all camber board. So maybe the “system” camber that Arbor uses does make a difference in making it more forgiving. And maybe the subtlety of the camber also makes a difference (camber looks and feels subtle on this board – not hugely pronounced).

Can handle speed pretty well, especially for a centered, true twin board. Not a mega-bomber but handles speed ok.

Pretty good in uneven terrain without being great.

Great on the approach, good pop, solid landings and great for spins – so pretty much the jumpers board. Only reason I didn’t give it 5/5 is that, whilst the pop was very good, it wasn’t out of this world good.

Approach: 5/5 – maneuverable and could handle speed on the approach

Landings: 4.5/5 – stable and could really stomp landings on this. Being medium flex helped it on larger jumps too

Pop: 4/5 – really good and easily accessible (i.e. didn’t have to really wind up to get the pop out of it) – but I have ridden boards with more pop, so I couldn’t give it 5/5

About as good as it gets. The only thing that would make it better if it was asym. But otherwise pretty much just as good riding switch as normal.

Was fine to jib with. To be exceptional on jibs I prefer a flat section between the feet or rocker and something softer flexing, but I felt pretty confident jibbing on this board none-the-less.

I didn’t take it into a pipe – but it’s got decent edge hold in hard/icy conditions, has good speed for a twin and that speed and camber would help to drive it up the walls – and also had good pop – and being centered and twin and not too soft a flex, I think this would be a good pipe weapon. If you’re interested in learning more about the Westmark Camber, are ready to buy or want to research current prices or availability, check out the links below.

If you want to see how the Westmark Camber compared to other freestyle boards or want to check out some other options, check out the next link.